Giving Thanks for Resilient Roofs

Giving Thanks for Resilient Roofs

After Hurricane Elsa struck Barbados on 2 July 2021, she left a trail of damage and destruction in her wake. Fortunately, there were no deaths, but many houses were either damaged or destroyed. According to the initial reports from the Department of Emergency Management, “there are 1,333 reports of roof damage; 326 reports of other house damage; total house collapse 145.”

There were four houses of special interest to the Barbados Association of Retired Persons (BARP) which didn’t suffer this fate. These houses were part of the Resilient Roofs Project funded by the Barbados Light and Power Company Limited (BL&P).

Under the terms of the Resilient Roofs Project, in 2020 BL&P generously donated the sum of $25,000 to BARP. These funds were intended to repair and/or secure the roofs of financially challenged elderly persons in the community who were likely to be negatively impacted by adverse weather during the annual hurricane season. The anticipated timelines for this project had to be significantly extended due to the lengthy period of rainy weather during the closing months of 2020, and after that, the ongoing national restrictions resulting from the onset of the COVID-19 pandemic.

BARP disbursed the funds to the BARP Charitable Trust, which was its executing agency for this project, and similar forms of assistance to BARP’s members. The Trust’s Personal Assistance Committee (PAC) reviews all applications for assistance, conducts assessments and then makes recommendations to the Board of the Trust for approval.

But it’s not so much the four houses that received special attention under the Resilient Roofs Project that BARP was concerned about, but the families who live in them. Rev. Clayton Springer is Chair of the PAC. He describes the issues faced by the eventual beneficiaries:

Two elderly brothers, aged 79 and 74 years old, live in an aged coral stone three-bedroom structure located in St. Philip. Their house has a traditional parapet roof, but the entire roof of metal roof sheets was in an extreme state of disrepair. The centrally placed metal gutter was also completely defective, and rainwater poured into the house whenever it rained.  The full costs of repairing this roof amounted to $17,579.75.

A Family of Three

Then there was the 63-year-old widow who resides in St. George. She retired medically unfit due to chronic back problems. This lady lives with her 26-year-old son, who is a full-time undergraduate student pursuing a Chemistry degree at the University of the West Indies. This industrious and enterprising young man also works as a part-time small farmer to support himself and assist his mother. A 10-year-old granddaughter also resides at the home following the untimely death of her mother. Their roof contained a number of galvanized sheets and ridge caps which were in an advanced stage of weather-related damage and disrepair. This resulted in severe leakage whenever it rained. The cost of removing and replacing the defective galvanized sheets and ridge caps amounted to $3,335.00.

This 68-year-old recipient uses a wheelchair for mobility and was referred by her home church in St. Philip. She has been a wheelchair user since 2016 due to a deteriorating spinal problem which has plagued her for several years. This former farm worker lives in a three-bedroom wooden house which has been undergoing essential repairs on a spasmodic basis for some time.

The evaluation by the professional builder who did the mandatory site visit revealed several areas requiring remedial work. However, it was determined that fixing the roof was the priority as the roof was the focus of the project. The roof was repaired to the great satisfaction and relief of the beneficiary, as several sheets of badly rusted galvanize and the ridge caps were replaced, and hurricane straps installed at a cost of $1,678.45.

While there is great satisfaction with the rehabilitation of the roof, there is an ongoing concern that the eastern siding boards need repairs to prevent the entry of rain and wind. There is also a need to have the plumbing for a newly constructed indoor bathroom finished, and the associated well cased up and properly covered. A ramp is also needed to facilitate accessibility of the client to safely enter and exit the house and a complete painting of the exterior would be useful.

The fourth beneficiary is a 67-year-old female retiree who lives alone in the parish of St. Michael. The poor state of the corrugated Perma Clad sheeting and the ridge cap of her roof left her vulnerable to the elements. The roof was further imperilled during the passage of Hurricane Elsa and she also recounted the frenzied rush to cover as many of her possessions as possible so as to forestall additional headaches. The repairs – inclusive of materials and labour – amounted to $2,400. She has a new sense of relief that her tribulations are ended and is more confident in facing the rest of the hurricane season.

Standing Up to Hurricane Elsa

So if you’ve been doing your calculations, you can see that virtually every penny of the funds donated by the BL&P was spent on making life a bit easier for these persons.

Four households – comprising three elderly females, two elderly males, a young man who is a university student and a girl who is a primary school pupil – are now living in more secure housing because of this intervention. Elsa huffed and puffed, but she couldn’t blow their BL&P-BARP Resilient Roofs houses down. The experience of the elderly wheelchair user confirms the significant value of the hurricane straps in sustaining the integrity of the roof. She credits the installation of the hurricane straps with ensuring the resilience of her roof. This lady vividly recounted the agonizing sound of the roof straining successfully and withstanding the terrifying winds of Hurricane Elsa as she sat petrified in her wheelchair while pondering her plight in the event of the roof flying off and the rains flooding the house.

Rev. Springer explains that, “When we checked back after the rains we had in November last year, no water went into the home of those elderly brothers. And for the first time in many years, they didn’t have to look for something to cover down their things. Their joy was complete. However, that joy does not match with how they behaved when Elsa passed and they realized there were no issues with water. They were the happiest persons, I believe, in the universe.”

There is another benefit to improving people’s physical circumstances which isn’t always considered. Rev. Springer says, “Sometimes we do not understand the emotional and mental trauma that people go through when they have poor housing, especially with the roof”. He adds that, “It is a very burdensome weight on people’s minds. Obviously in the house are virtually all your possessions that you would have worked for, saved for, and are dependent on to carry you through until you leave this life. When the rain sets up, your heart is in a panic. Your pressure tends to go up, and all types of emotional harrowing go on in the lives of people who have roof problems.”

Rev. Springer says, “When you see the circumstances before and after the repairs, and when you see the expressions on the people’s faces, it’s worth all of the challenges that we would have gone through.”

Hurricane Elsa has confirmed that our national housing stock is particularly vulnerable to roof damage. You can be part of this effort to make the lives of senior citizens more secure, by donating to the BARP Charitable Trust. Donations of any amount are most welcome; however, those $200 and over have the additional benefit of being tax deductible.

So please download a donation form from the BARP website, or pick one up at the BARP office in Hastings. You’ll be making a contribution to physical and mental well-being of your fellow citizens, and making Barbados more resilient before the next hurricane comes.

Learn more about the Charitable Trust »» 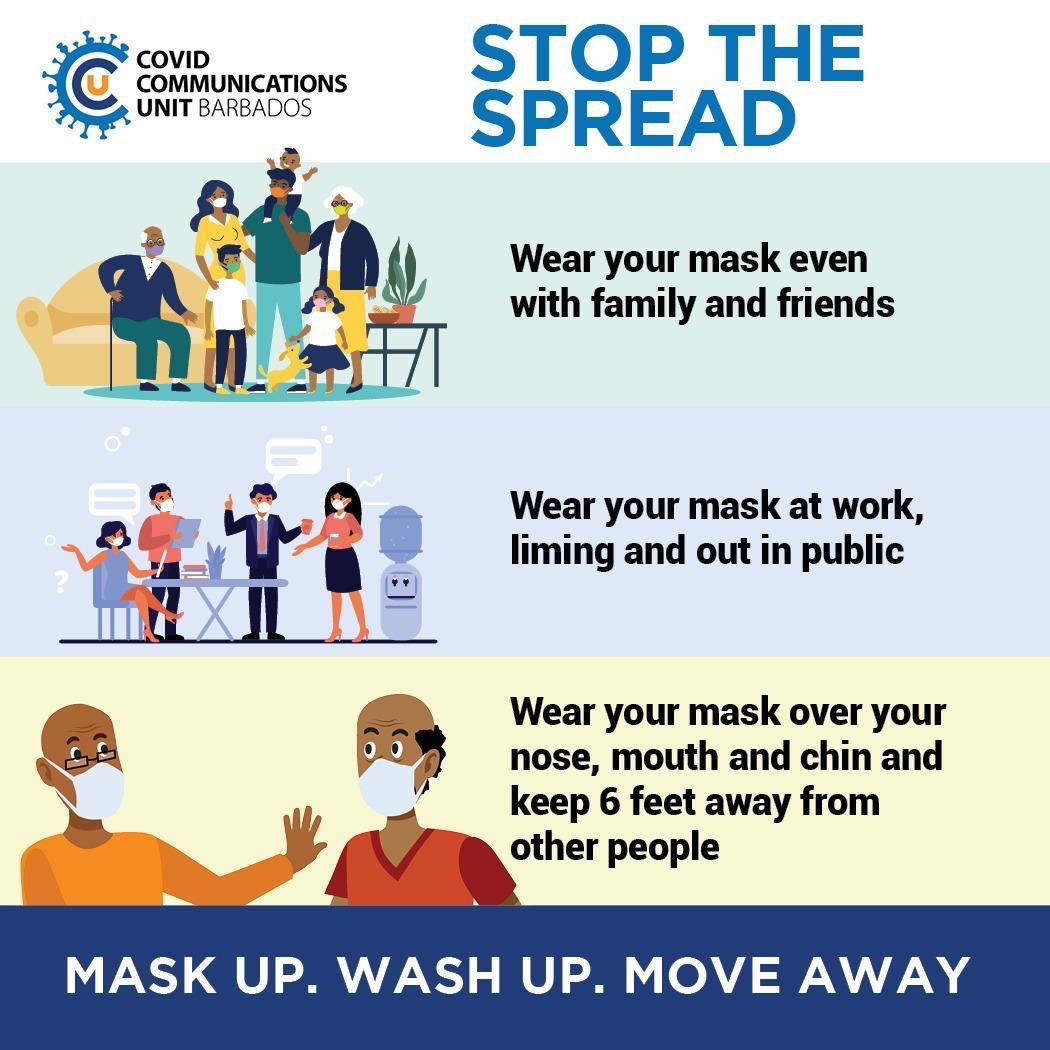 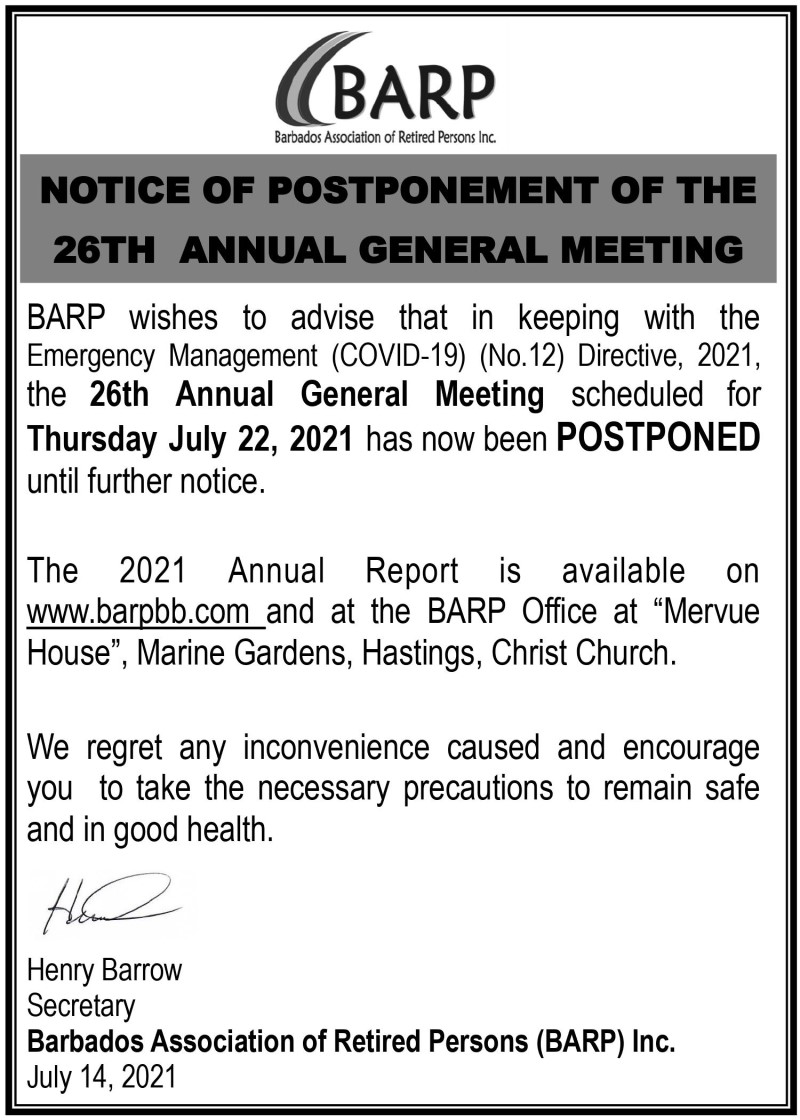 The Barbados Association of Retired Person (BARP) is postponing its Annual General Meeting, which was scheduled to be held on Thursday, July 22, 2021.

The Board of Directors has decided to postpone the meeting until further notice following the Government’s decision on Sunday to reintroduced restrictions over the next two weeks including the number of people allowed at certain gatherings.

BARP’s president  Marilyn Rice-Bowen said: “We are rigidly following the health protocols and the national guidelines as we play our part in order to bring the COVID-19 pandemic under control.

We would need at least 200 people at our AGM to have a quorum and in the prevailing circumstances such a gathering is not possible," she said while noting the Board and management at BARP will monitor the situation and keep the membership informed.

Printed copies will be available at the BARP office from July 2, 2021. 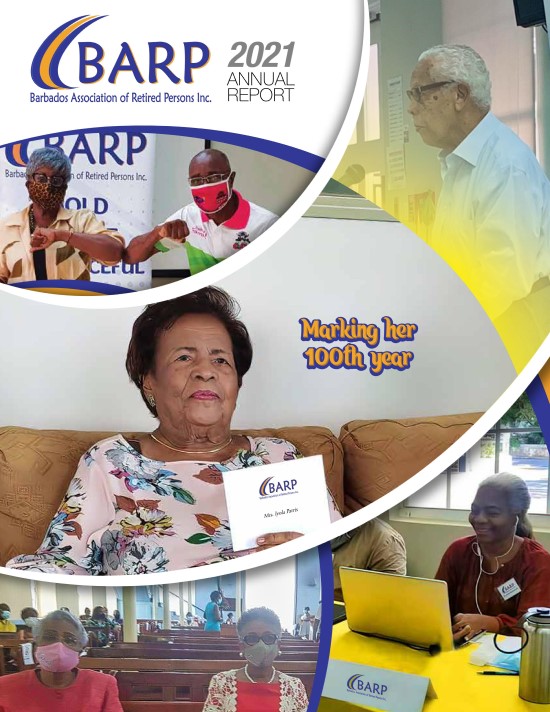