Dr. Adrian Lorde was featured on our Fifty Plus Radio Show discussing the AstraZeneca vaccine.

Do Something About Kite Noise

Do something about kite noise

IN 1910, the German bacteriologist Robert Koch, who won the Nobel Prize for medicine in 1905, predicted: “The day will come when man will have to fight noise as inexorably as cholera and the plague.”

For many inhabitants of this island, that day has already come. Cholera and the plague – keep your fingers crossed – are now behind us, but not COVID-19.

These nights, we worry about the noise from kites as we dodge COVID-19. All the while, successive Governments ignore the cries of the citizens, pretending that they do not know of the nuisance of kites flying all night long.

As a boy, no one flew more kites than I. My mother used to notice that my skin became darker during the long vacation between July and September, resulting from hours upon hours of exposure to the sun.

I could never understand, though, the reason for flying a kite at night. We called it “staking out”. It seemed to me that the objective was simply to make uncomfortable other people downwind from the owner of the kite.

Back there in the 1940s and 1950s, kites were not as noisy as they are these days. They were appreciated for their beauty and design, not their noise. And kite-flying was a skill.

The noise-making part of the kite, known as the “bull”, like the kite itself, was made of thin paper. Many a villager got an unexpected respite the night rain fell because it invariably brought the kite down. Not so these nights: the kite flies on because it is usually made of plastic – that double-edged sword of modern civilisation.

The “bull” nowadays, like the plastic it is made of, never wears out, and the noise, like a bulldozer in the sky, goes on throughout the night.

Back then, there was such a thing as “kite season”, at Easter time. Nowadays, it’s all year round, especially at Christmas.

I saw a man – not a boy – “letting out” a massive square kite the other night . . . at seven o’clock. A few minutes after he got it in the air, he could no longer see it; he could only hear it, and hundreds of law-abiding citizens in the districts downwind had to put up with the noise for the remainder of the night.

Noise is a biological stressor that has negative effects on the entire physiological system, contributing to elevated blood pressure, and changes in blood chemistry.

Noise is one of the leading causes of hearing loss, making communication difficult and frustrating. Moreover, much of the hearing loss that people associate with ageing is actually caused by noise exposure.

Noise causes sleep disturbances, which lead to a host of problems, including reduced job performance, mood changes, and increased risk of vehicular accidents.

Noise renders us less tolerant of frustration and numb to the needs of other people, further reducing our quality of life and the civility of society.

The late Dr Frances Chandler, an untiring opponent of this nuisance, wrote in her column of February 12, 2014: “Calling the police doesn’t help because there are apparently no laws which they can enforce.”

Traffic policeman Siebert Johnson is the exception. He begs and begs almost every weekday morning. 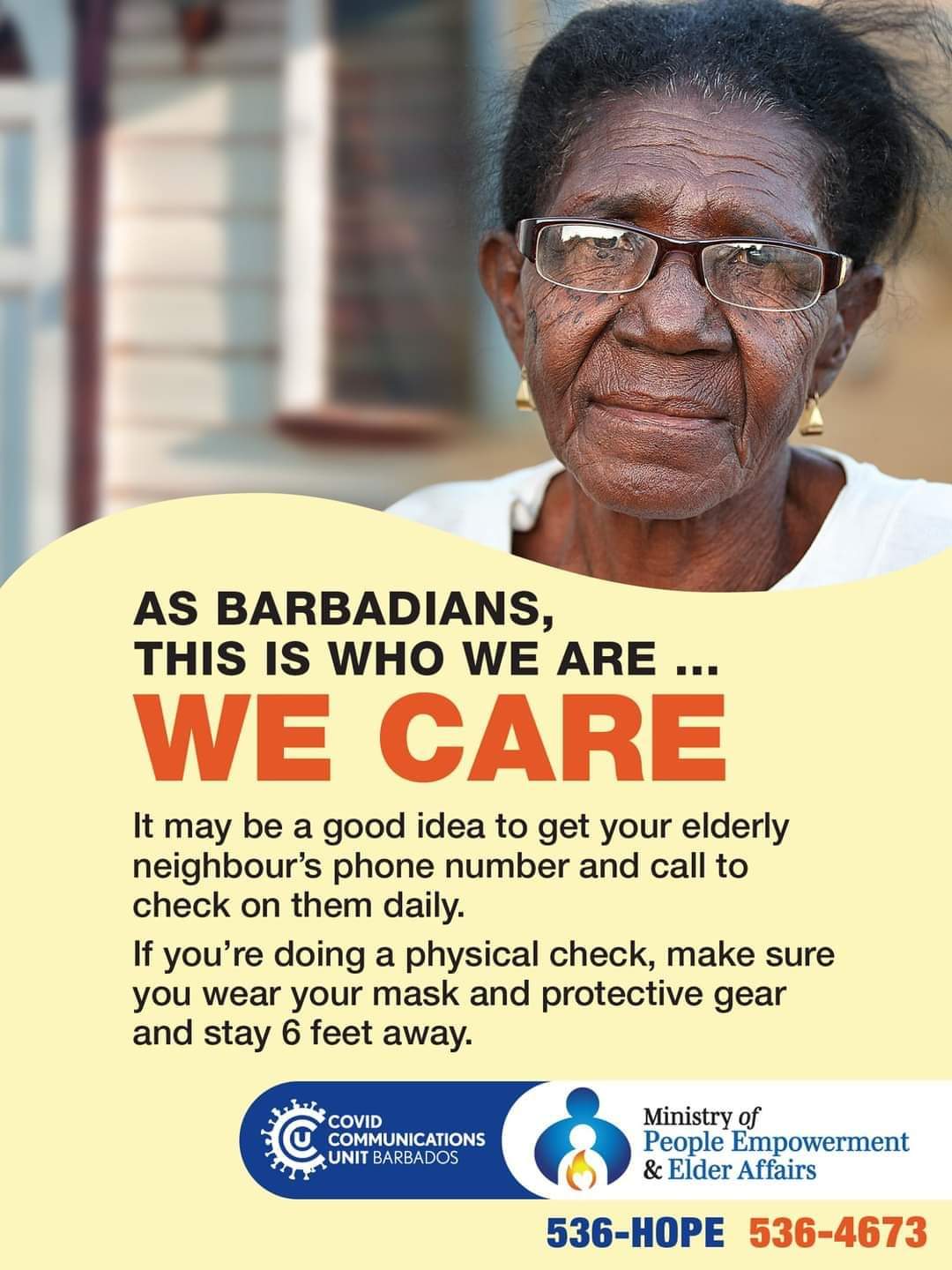 As Barbadians, this is who we are. WE CARE.

It may be a good idea to get your elderly neighbour's phone number and call to check on them daily.