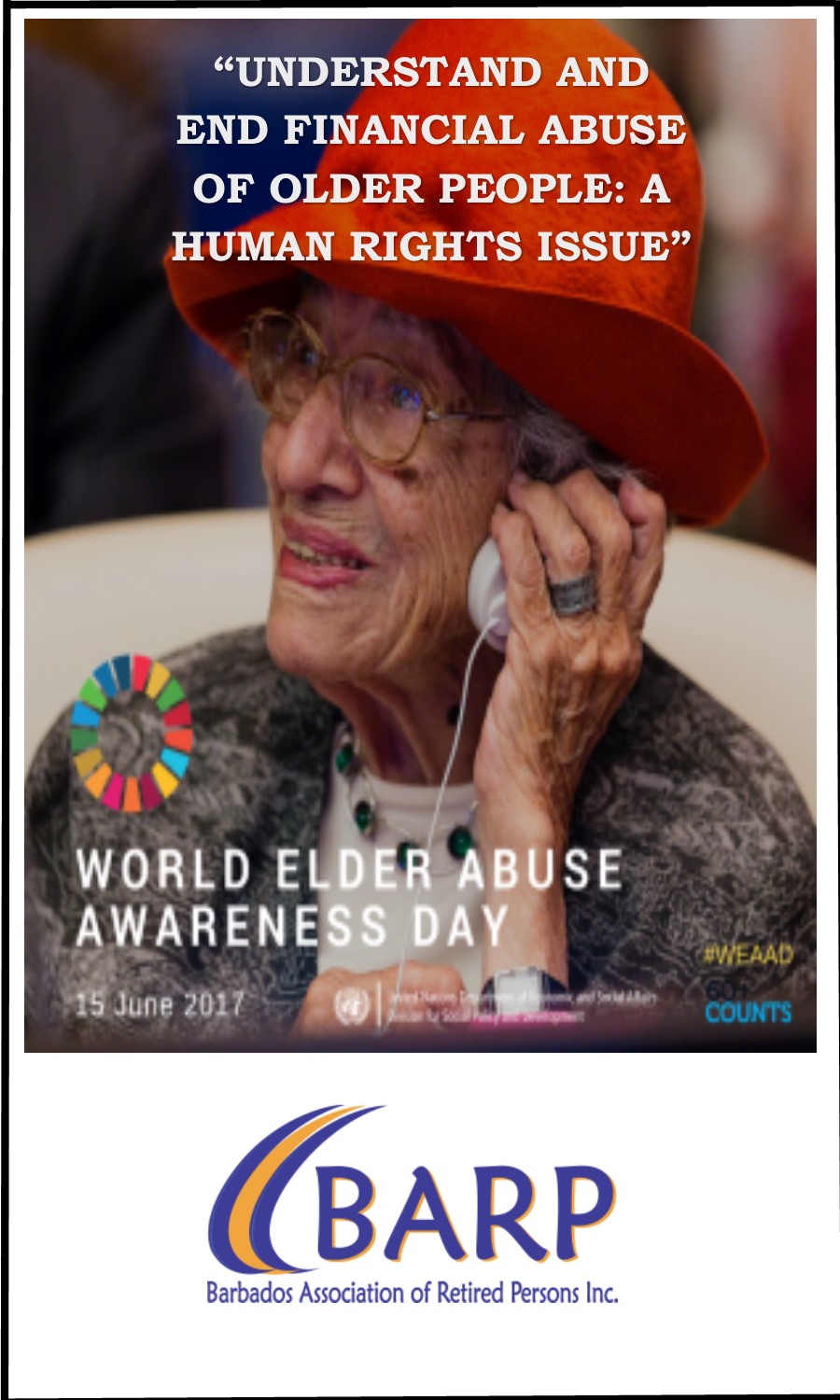 This year’s 2017 World Elder Abuse Awareness Day (WEAAD) theme, “Understand and End Financial Abuse of Older People: A Human Rights Issue.”, focuses on the prominent issue of financial abuse, as older persons often depend on others to “look after” their affairs and finances, leading to the breakdown of relationships and the misappropriation of funds.

The theme underscores the importance of human rights, as all individuals are entitled to human rights regardless of race, gender, age, and class. It also underlines the significance of preventing financial exploitation in the context of elder abuse to the protection of older persons’ rights. As we grow older, our rights should remain and ought never to be taken away. Older persons must be shielded from all forms of abuse, as their dependence can be taken as a weakness, resulting in victimization and mistreatment from those they trust.

It is surprising the serious nature of cases which go unrecognized yearly and are never reported. Based on available evidence, 5 to 10 per cent of older people globally may experience some kind of financial exploitation. However, such abuse often goes unreported, partly due to shame and embarrassment on the part of the victims, or their inability to report it because of cognitive and other impairments, such as dementia and memory loss.

Financial exploitation itself takes many forms. Many fall victim to theft, fraud, forgery, misuse of property and power of attorney, as well as denying access to funds. This often results in property grabbing, ejection from homes and denial of family inheritance.

Too often we are told stories of older persons who have lost it all due to the dishonest activities of those who prey on the kindness of many seniors. Caregivers sometimes seize opportunities to upgrade their lifestyle by appearing to exert compassion to ensure access to cheques, bank accounts and properties. They tend to isolate older persons from friends, family and neighbours, fabricate stories regarding their expenses and often threaten seniors if they report the abuse.

Therefore, risk factors for falling victim to financial exploitation range from social isolation, loneliness and depression to emotional or physical dependence on the perpetrator, financial dependence of the abuser on the older person, certain living arrangements, poverty, widowhood and lack of support networks, in addition to ageism and other types of prejudice, discriminatory inheritance systems, as well as weak police and criminal justice systems.

Some have argued that due to the baby boom and increased life expectancy, abuse of older persons will continue to rise. Some contend that as a result of a current and projected increase in the number of elderly people, it will become burdensome for many families to take on the responsibility of elder care. In previous generations extended family members could share the tasks of caring for the aging. Unfortunately, changes in society, such as strained economic times and smaller nuclear families have placed the strain and responsibility of caring for the elderly on a select few. This may be one of several contributing factors as to why some individuals become abusive towards the elderly.

In light of this, greater legislation to combat the ills of financial abuse along with with increased awareness of the problem nationwide is needed. The Draft National Protocol for Prevention, reporting, Investigation and Management of Elder Abuse has been created and submitted to cabinet for consideration. In addition, island wide campaigns need to be ongoing, not only on World Elder Abuse Awareness Day.

Older people have the right to a life of dignity in old age, free of all forms of abuse, including financial and material exploitation, which could lead to poverty, hunger, homelessness, compromised health and well-being, and even premature mortality.

We must explore effective means of strengthening protections against financial and material exploitation, including improving the understanding of this form of elder abuse and discussing ways of ensuring the participation of older adults themselves in ending victimization.

We advise older persons to fight the stigma and report any forms of financial exploitation met, whether by loved ones, friends, attorneys or due to any circumstance where they may be pressured to act against their will.

BARP takes a stand against Elder Abuse. We are well aware that older people are an incomparable resource for their families, communities and both the formal or informal workforce. Older persons should always be treated with dignity and respect, as their rights do not depend on their circumstances. We also urge others to take a stand against all forms of abuse and to report any suspected cases.

Read 1074 times
Tweet
Published in News
back to top